What's the Difference Between Speed and Velocity? 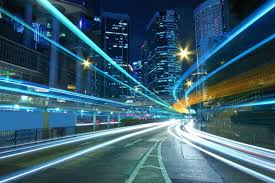 What's the Difference Between Speed and Velocity?

When describing the motion of objects in terms of distance, time, and direction, physicists use the basic quantities of speed and velocity. Two terms, two distinct meanings. Yet, not uncommonly, we hear these terms used interchangeably. So, what’s the difference?

Speed is the time rate at which an object is moving along a path, while velocity is the rate and direction of an object’s movement.

When it comes to measuring motion, that is the relative passage of an object through space at a certain rate of time, several different things need to be taken into account. For example, it is not enough to know the rate of change (i.e. the speed) of the object. Scientists must also be able to assign a vector quantity; or in other words, to know the direction as well as the rate of change of that object. In the end, this is major difference between Speed and Velocity.

Though both are calculated using the same units (km/h, m/s, mph, etc.), the two are different in that one is described using numerical values alone (i.e. a scalar quantity) whereas the other describes both magnitude and direction (a vector quantity).

As an example, consider the case of a bullet being fired from a gun. If we divide the overall distance it travels within a set period of time (say, one minute), then we have successfully calculated its speed. On the other hand, if we want to determine its velocity, we must consider the direction of the bullet after it’s been fired. Whereas the average speed of the object would be rendered as simple meters per second, the velocity would be meters per second east, north, or at a specific angle.

What do you know about Cerenkov Radiation?

What is the explanation?